Search It's an asymmetric world 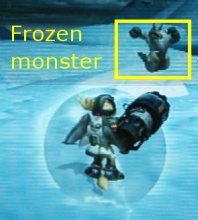 Electronic games are now much better than they used too, far more engaging, complex, interactive and visually appealing. Now with that truism out of the way, along with all the good stuff in games come some interesting features, usually unintended, sometimes fun, others frustrating.

I found a fun and useful glitch in “Ratchet and Clank: Going Commando”. When in the frozen planet level, if you kill one of the monsters that pop up from the holes in the ground at the right moment, it will freeze in mid-air and block other monsters from appearing from the same hole, which is a good thing as those monsters are annoying and can reduce Ratchet’s health very fast when they attack in groups. On the left there is a screenshot of a frozen monster. Timing seems to be one of the variables for this glitch and a big gun helps too :-). 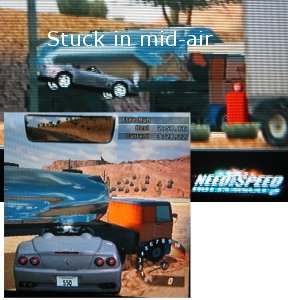 The ultra-high-speed catch up glitch is also known to happen in a another car sim “Grand Turismo 3”, although I’ve never managed to have a long enough lead to test that.

BTW, all of these are Playstation 2 games.